A Semiotic Analysis of "Luxuriance ô Beauté!" - An Illustration by Serge Arnoux

Dr Philip Rayner is an international media consultant with over 30 years experience of writing and teaching about the media in Further and Higher Education. He was Senior Lecturer in media communications at the University of Gloucestershire and Principal Moderator for AQA A level Media Studies. He is also the co-author of several text books, including AS Media Studies: The Essential Introduction for AQA (2008). He spent two and a half years in Ethiopia with his wife Professor Kate Ashcroft working in the education sector and was the joint author along with Kate of the book Higher Education in Development: Lessons from Sub Saharan Africa (2004). It just so happens that they now live a couple of streets away from us in the South of France and with a common love of dogs we have got to know each other quite well.

"Visual semiotics is a sub-domain of semiotics that analyses the way visual images communicate a message. Studies of meaning evolve from semiotics, a philosophical approach that seeks to interpret messages in terms of signs and patterns of symbolism" (Wikipedia)

Over a glass or two of wine we have often discussed the subject of semiotics and the meaning of some of my own art, it seemed a good idea therefore to ask him to study and interpret one of Serge Arnoux’s illustrations based on William Blake's "Proverbs of Hell" that I am currently printing from the found plates.

When Robert asked me to analyse this illustration I felt a little daunted; where to start? It has been speculated that the found plates were originally intended for a book based on "The Proverbs of Hell" in William Blake’s "The Marriage of Heaven and Hell" itself a book published as printed sheets from etched plates. The question worth asking is how, and why, were these plates in the Sarlat scrapyard? A day or a week later perhaps they would have been destroyed forever. This sense of serendipity is also a little disconcerting, the chance visit to Sarlat, that this scrapyard contained these plates, that someone would have rummaged around amongst all the scrap and to unearth them and recognise their potential. We can only speculate on the foregoing and of course what motivated Arnoux to produce the plates in the first place. Hopefully given time we should be able to fill in more of these gaps. Below is one of the prints Luxuriance ô Beauté!" plus the original copper plate etching. What follows seeks to explain the complexity of the image on the plate and uncover the layers of meaning that lie beneath it? 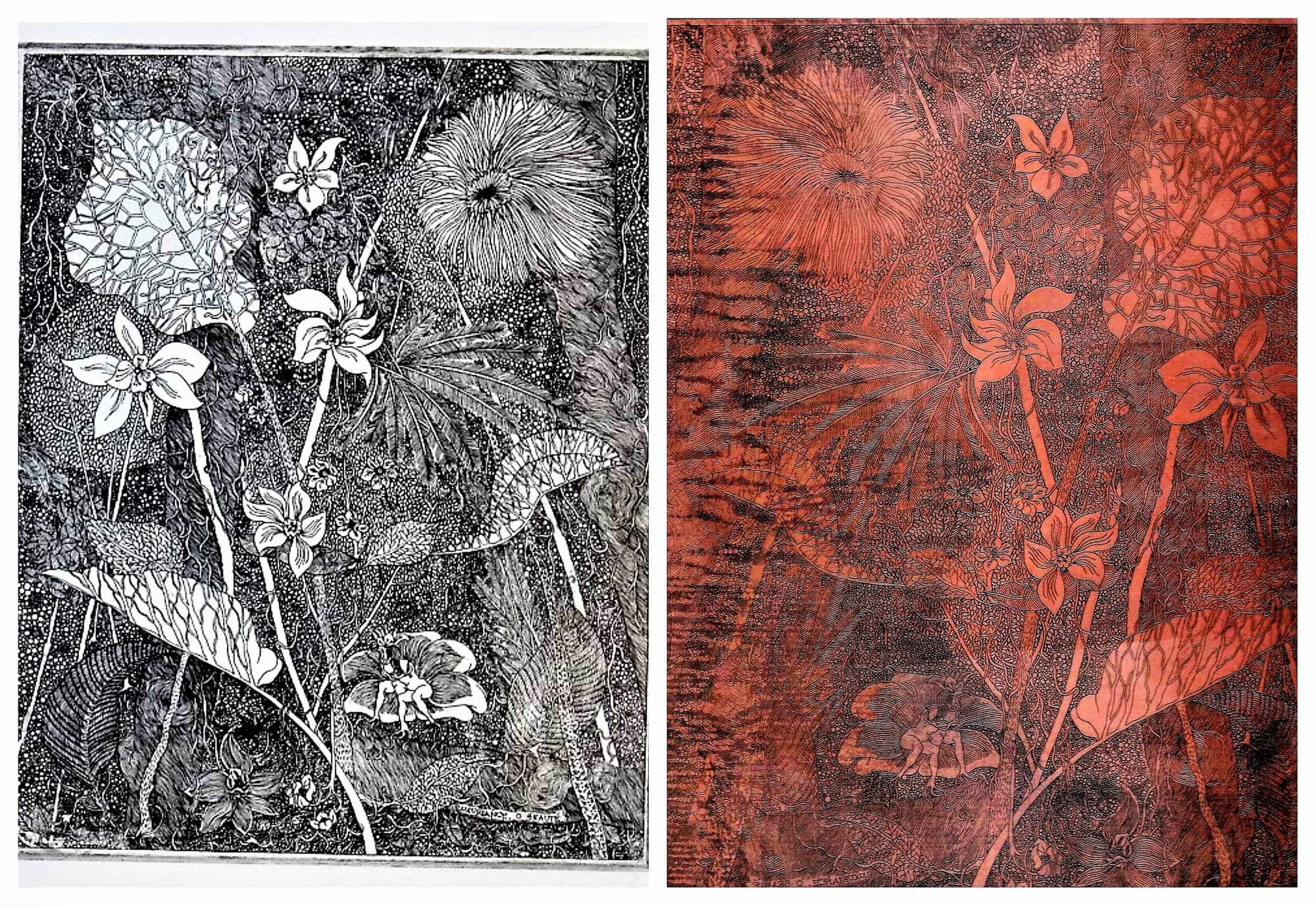 I am not a print-maker but I can recognise craftsmanship and acknowledge the skill, dexterity and, in particular, the complexity of the image etched onto the found plate. It is full of cross-hatching, there is almost no blank or white space. I cannot begin to understand how Arnoux created this plate; the meticulousness, the care and thoroughness of the etching, keeping the shape and form of the many species of flora, making a harmonious whole and yet managing to set out clearly all the various plants.

I was asked to conduct a semiotic analysis of the plate. One of the problems with semiotics is that it can be very subjective, that each analysis can result in different interpretations, conclusions and meanings depending upon the relationship between the ‘reader’ and the ‘sign’. In semiotics a sign is dyadic, it consists of two different elements; the physical form which the sign takes, in this case the found plate including the physical presence of the image etched onto it – this is called the ‘signifier’. The second element is what is being ‘signified’ by the image, the concept, ideas or attitudes that it represents, the meaning contained within the signifier. The first step in analysing the plate is relatively straight forward and is a matter of describing what can be seen without adding any assumptions or undisclosed associations or information.

Detail from the printed image

So the image itself is a densely etched image of various flora. There are three dominant plants, two of which contain the majority of the white space shown in the image and therefore they stand out as do four smaller plants also delineated by their use of white space. The three larger plants and their stalks create big, bold diagonal lines across the plate. 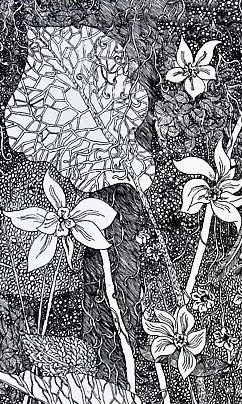 Detail from the printed image

The background contains dense cross hatching portraying a wide variety of other plants and foliage so dense that it is almost impossible to distinguish individual species. What may look natural, reflecting nature, is in reality very unnatural, an artificial creation. What initially appears to be a rather chaotic haphazard collection of plants is in fact a highly complex, crafted design. Arnoux chose this arrangement of plants and leaves; perhaps modelling them from real life, perhaps trying out different arrangements or by making preliminary sketches, trying out various possible combinations and arrangements before deciding on the final design. The plants look realistic, I am not a good enough botanist to say that they represent real plants but I suspect that they do. Why did Arnoux choose these particular plants? What do they signify? Will Arnoux have copied them from real life? Why are some of the plants bigger than others? Are they particularly significant? What one would like to know is why this is the design he finally settled on.

At odds with the apparent naturalness of this image is the figure (or figures) towards the bottom of the plate slightly right of centre. Even with a magnifying glass it is difficult to work out exactly what this is; initially it looks like two entwined human bodies but there appears to be only three legs and instead of feet there appears to be the roots of plants. There looks to be two faces but featureless and with what at first glance looks like hair but also part of the flower they are resting in. In the bottom right hand corner is inscribed the motto “LUXURIANCE, O BEAUTE!”

One of the key methods of giving a sign its meaning, its significance, is through the use of codes. Chandler (2017) defines codes as “a set of practices familiar to users of the medium generating operating within a broad cultural framework”. Codes organise signs into meaningful systems which correlate signifier and signified, creating an interpretative framework. What are the codes at work in the found plate? Strong images of flora in abundance, perhaps signifying the natural world run wild, fecundity or a headiness that links with Blake’s notion of ‘Exhuberance’? Particular plants often symbolise specific moods or ideas, such as rosemary for remembrance or daisy for innocence. This idea of the language and the potency of the images of specific flowers was particularly popular during the 18th and 19th Centuries. William Blake often used gardens and vegetation in his poetry and illustrations. 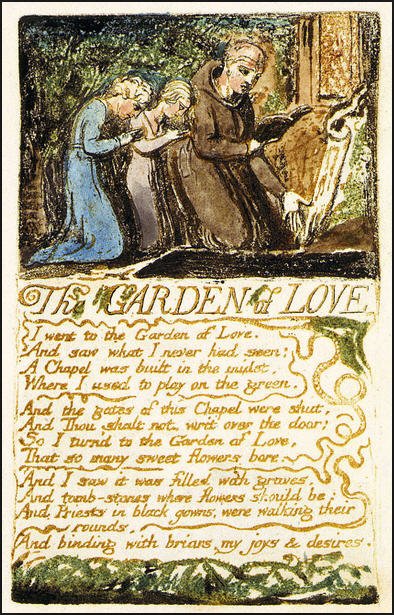 Perhaps Arnoux was attempting to reflect this? The meanings may change over time or according to culture but other people today will have more knowledge and expertise than I do to enable them to identify the individual plants shown on the plate and be better able to ‘read’ their significance. 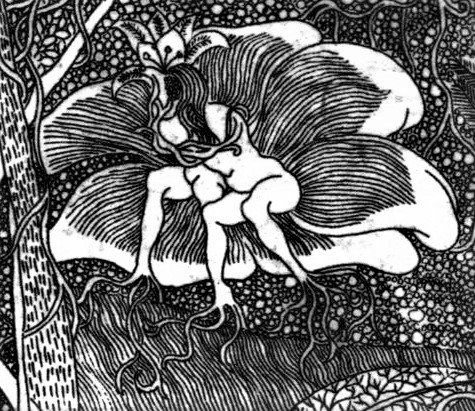 With reference again to the two small figures, their prescence seems enigmatic, their meaning, their purpose is unclear. Perhaps they are in some way mythic, representing the human in the midst of nature’s unruliness and grandure? Or the evil of man against the goodness of nature? Or perhaps, to return to a key surrealist code, they are in a dreamscape, a Garden of Eden?

It was noted in the previous blog that Arnoux was influenced by Surrealism and many of the other found plates contain quite graphic images of sex and nudity, key Surrealism codes.

However to me the Luxuriance ô Beauté! Serge Arnoux plate does not seem to share the Surrealists’ iconography or themes (Dali’s melting clocks, Chiciro’s dreamscapes or Margritte’s ‘Ceci n’est pas une pipe’) but rather remind me of Aubrey Beardsley and his preoccupation with dark and perverse images and grotesque erotica. 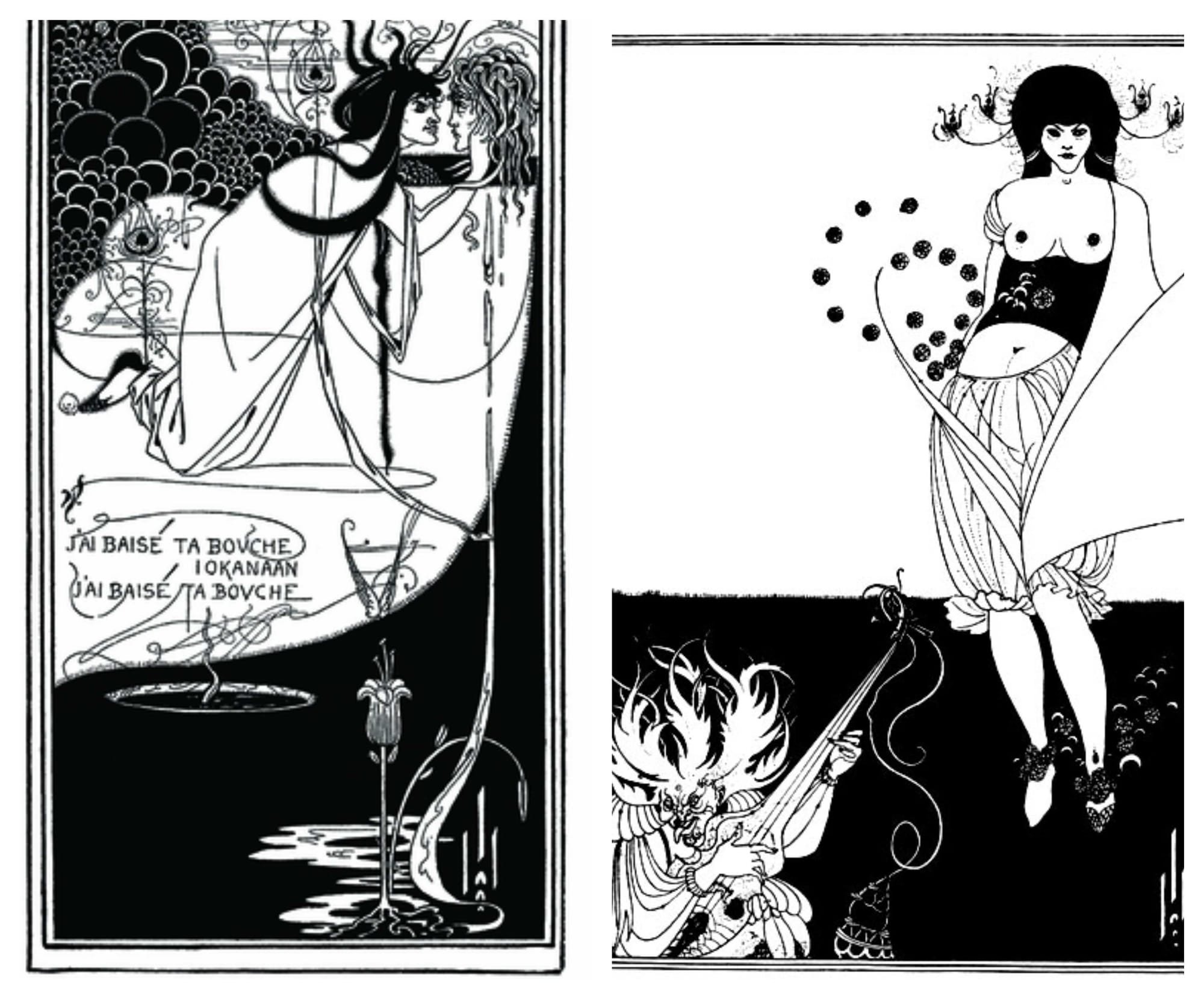 Semiotics, the interpretation of signs, generally relies upon sets of formalised and shared systems of meaning, often abstract in concept but generally recognised and understood by the sign’s intended audience (think about the controls on a television remote for example). This is problematic in the case of this found plate because we are not aware as yet of who the intended audience was. Certainly it was not us in 2018 looking at something salvaged from a French scrapyard. The overall meaning of the found plate is enigmatic, aberrant. The only means of anchoring the plate’s meaning is that small motto in the bottom right hand corner. Luxuriance could be a reference to the abundance and profusion of the plants shown in the image, the ‘exuberance’ of Blake’s quote. There is much debate about Blake and the meaning of "The Proverbs of Hell", the contrasts and double meanings contained in much of Blake’s writings and art. How does Arnoux interprete this quote? Is he suggesting that exuberance is ‘good’, somehow life affirming, a poetic vision that echoes Blake’s own?

To summarise this printed image will have different meanings for different people; the artist himself, his intended audience, whoever that may have been, and what is now his actual audience, us, but in a different time and context.

Mihaly Csikszentmihaly in his book Creativity. Flow and the Psychology of Discovery and Invention wrote

"Just as the sound of a tree crashing in the forest is unheard if nobody is there to hear it,

so creative ideas vanish unless there is a receptive audience to record and implement them."

Thank you Philip for writing the analysis. Makes for interesting reading and raises some intriguing points and questions. As you mentioned above, one of the problems with semiotics is that it can be very subjective. As such it's possible not everybody will agree with all of your thoughts and will have different ideas and interpretations. If this the case please feel free to comment or should you want to write a longer response use the email and I will post it!

On a final note I have just printed the master plates that list sixty-nine of the "Proverbs of Hell" in French! "Luxuriance ô Beauté!" is actually line 64. When I found the plates there were twenty-seven in total, including the two featured below. I wonder if he made plates for the other thirty-four "Proverbs of Hell"? Are they still out there waiting for another chance find or have they already met their fate and ended up in the melting pot? 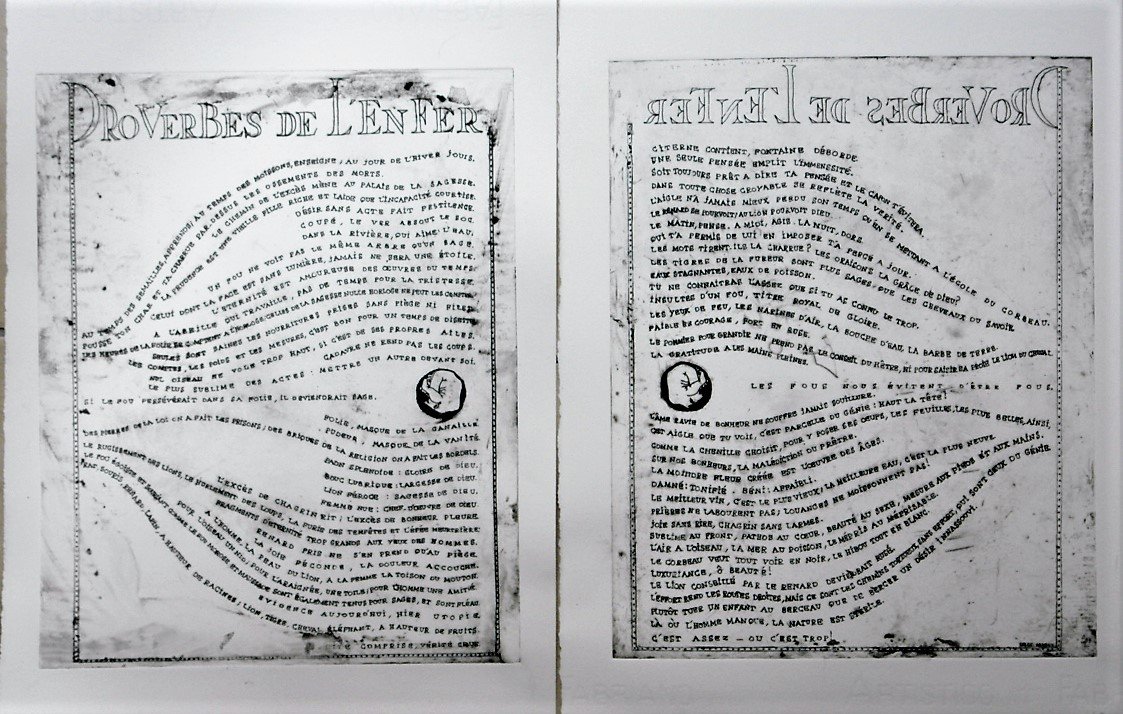 Each word on the above etchings is hand written in reverse onto the copper plate! Being a printmaker I know only too well how hard this is and how long it takes. As such In a future blog I thought it would be interesting to cover all the technical aspects of the actual preparation and printing of the plates.

In addition, I have also just uncovered the fact that Serge Arnoux studied at Ecole des Arts Decoratifs Paris under Jacques Villon, a pseudonym for Gaston Duchamp, who was a French Cubist and abstract painter and printmaker. He also just happened to be the brother of a certain well know artist and Surrealist! I was reading some excerpts from the book Marcel Duchamp Caroline Cross (2006) and from it and I quote  "There's going to be a Surrealist exhibition in Paris in 47 ...............I also had this idea that we could exhibit several old paintings from XVII/XVIII Century in tune with Surrealism." Duchamp wanted to hang paintings by Hieronymus Bosch, Arcimboldo and William Blake and the exhibition was to be called Surrealists Despite Themselves. Now that sounds like an interesting title for a future blog!